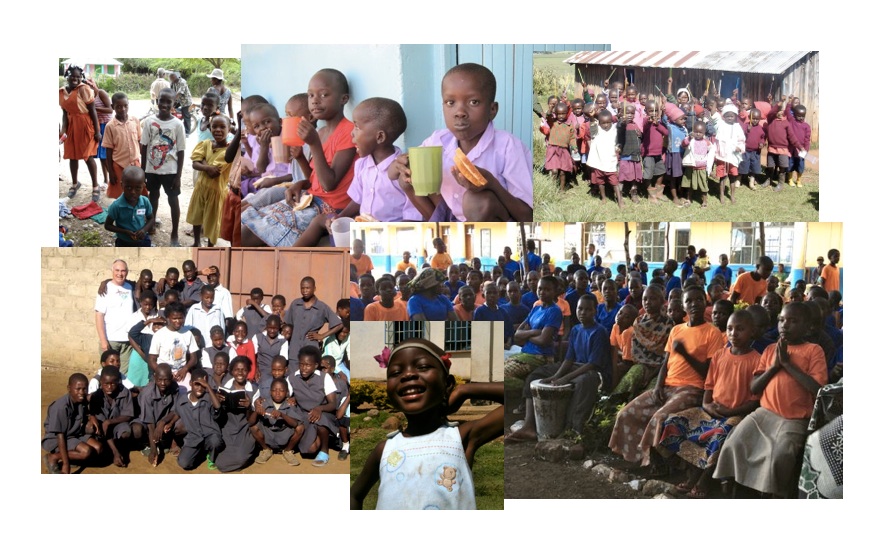 Riva Refuge was certified by the Internal Revenue Service as a 501(c)(3) organization in 2009. However, the core staff of Riva has been volunteering for over a decade with service projects in Kenya, Mexico, Panama, Costa Rica, Haiti, USA, and other countries.

Not all students present us with success stories. Kevin B. ran away from the boarding school where we’d been supporting him for three years. The principal offered to allow him to return and to take his final exams during the holiday break, which was a remarkably understanding and generous offer. Unfortunately, Kevin wasn’t with any of his extended family or friends. There was no way to contact him to forward this offer to him. Surely the principal would have offered counsel and advice as well as the opportunity to resume his education. In the end, Kevin didn’t reappear until well into the holiday break when the school had closed for the year. The result is that Kevin wasted the full year of tuition and boarding fees. He visited during the December visit, and explained that he had personal troubles with a fellow student. This was his last chance to remember that “actions have their consequences”, and he will no longer be funded.

A very kind and generous US volunteer/donor made sixty pillowcase dresses for little girls that were delivered in November. Thank you, Gloria P. You can see how these girls appreciate the dresses. 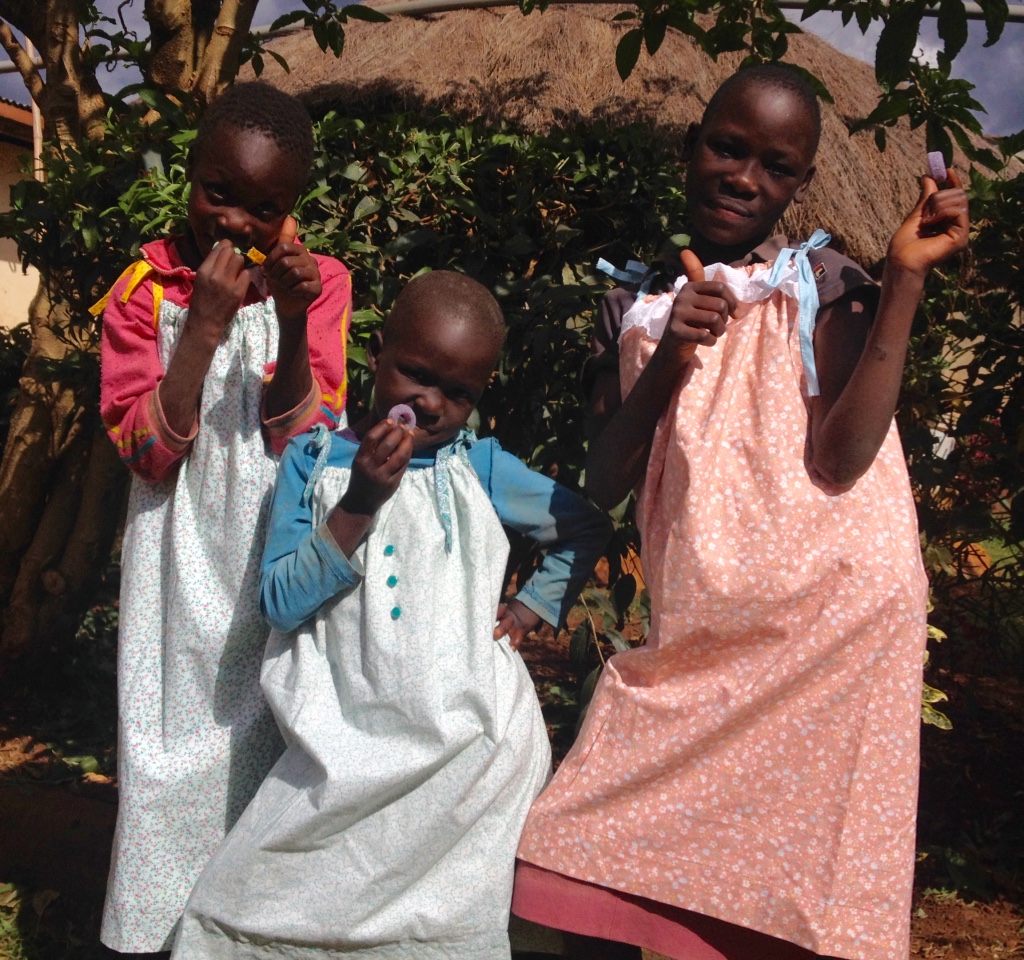 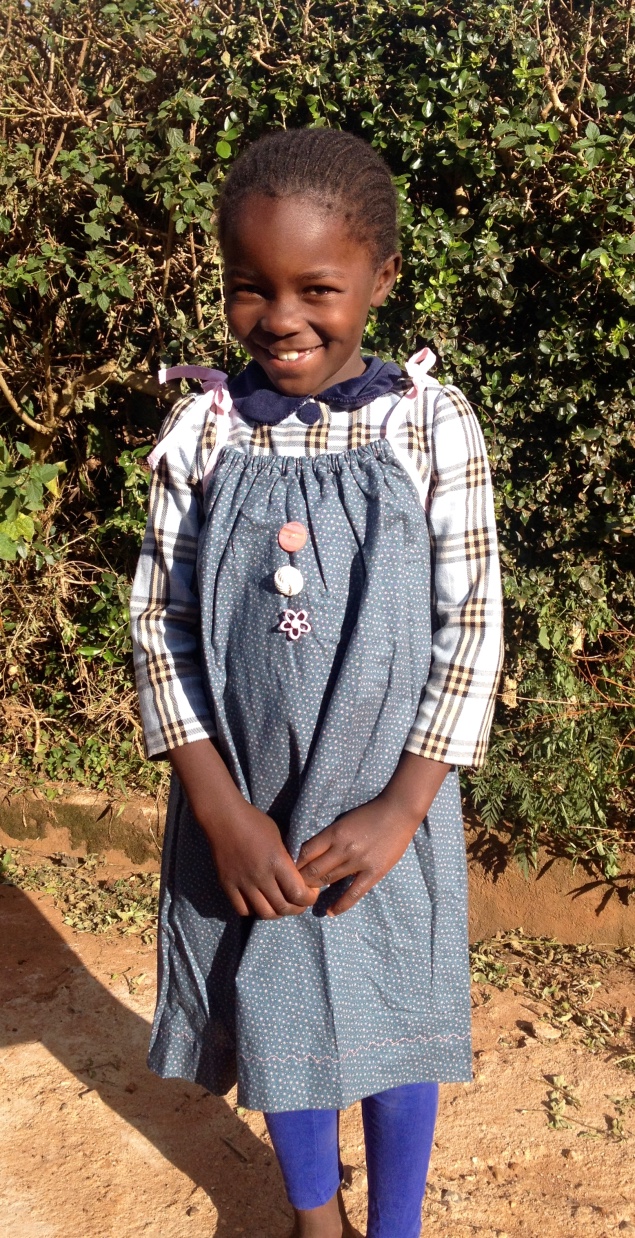 Martin is a 41 yr old man who has stage 4 throat cancer. He has a gaping hole from cheek to tongue, making eating and drinking very difficult. He is unbelievably thin. He asked yesterday if we’d find a place for him to go so that his wife would be able to care for their seven children instead of caring for him day and night. We reached out to Kimbilio Hospice, in Kipkaren, and they had room for him. We picked him up in the morning for the 3 hour drive. His wife Rose seems to be a very strong woman. She has been making some money doing hair for her friends and neighbors, and could do better business with a blow dryer and a stock of hair extensions. Meanwhile, we bought her bags of groceries and gave her money buy school uniforms and sweaters for the kids. Martin passed after 10 days at hospice and was buried on May 20 on their home plot. 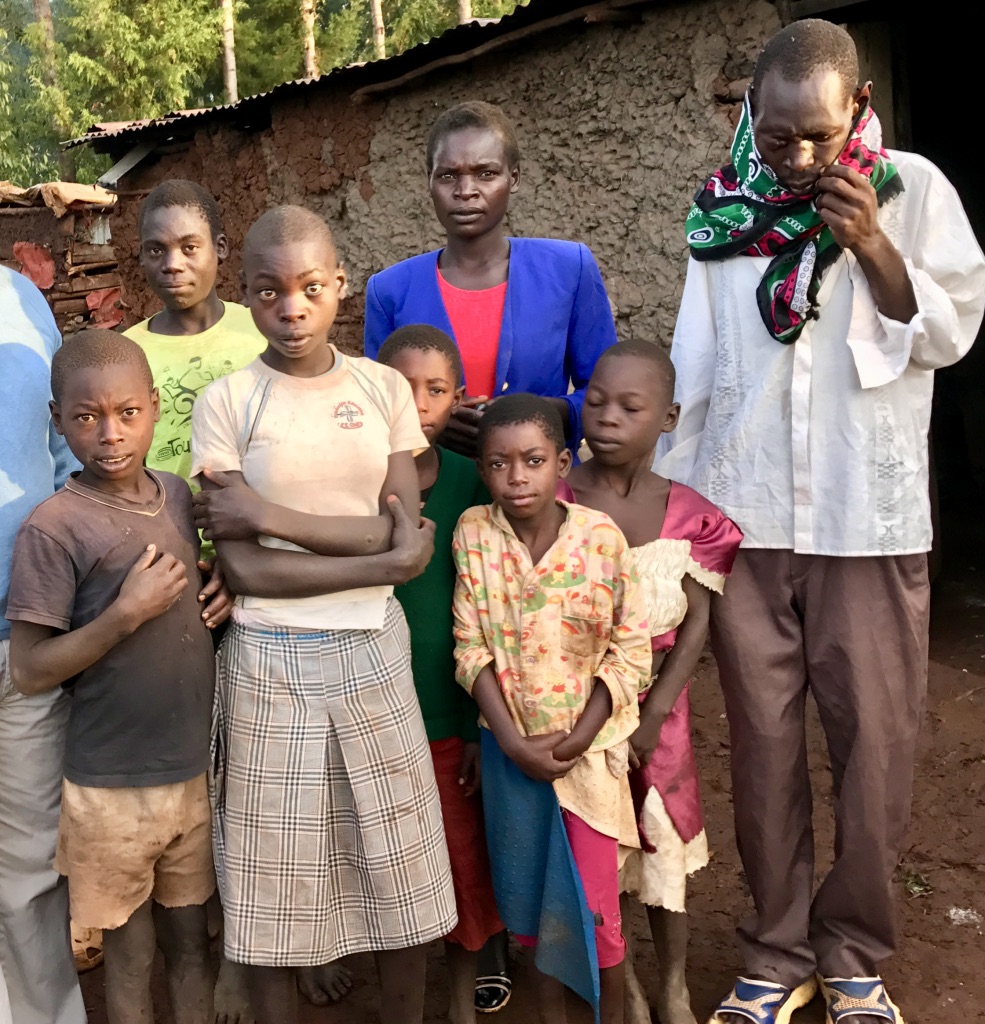 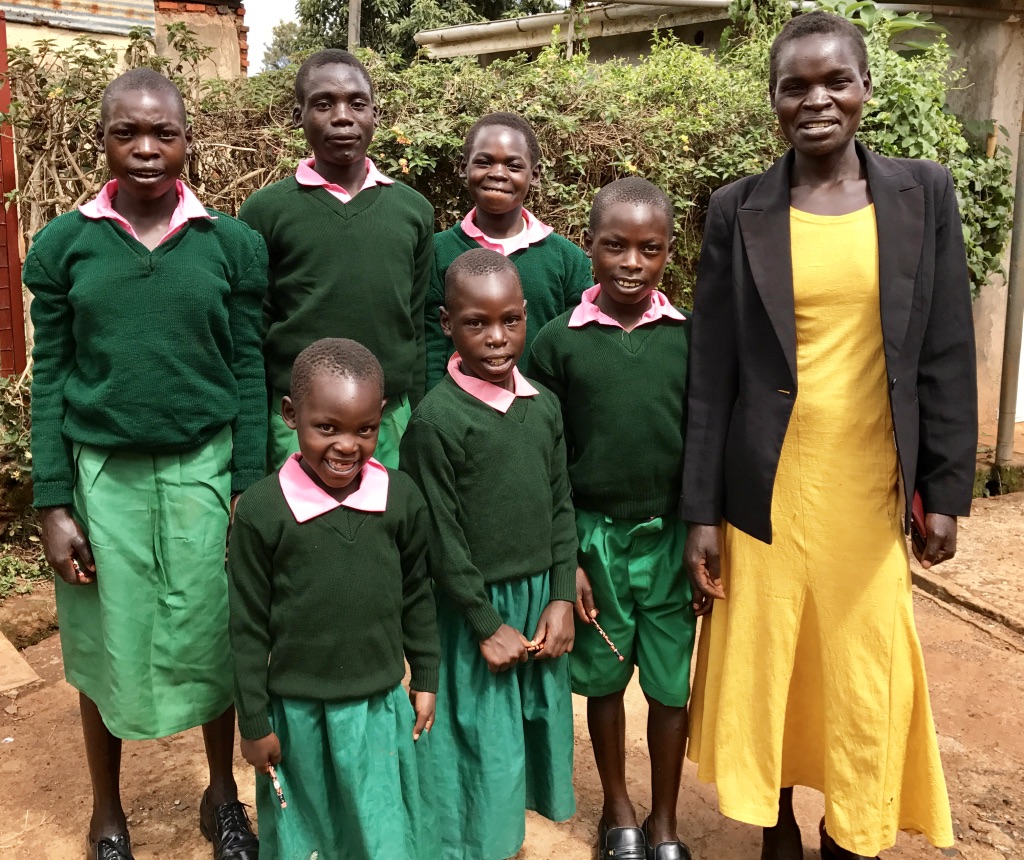 Kelvin B. is our sponsored student at Bomas Secondary School. His academic performance is exceptional, but needs to improve his social skills and character. He recently picked a fight with an underclassman, and has had some issues with basic honesty. We understand that Kevin comes from a very difficult background but we insist that students understand that “actions have their consequences”. In other words: Straighten up and fly right, or the scholarship ends. The principal was present during the discussion with Kevin. He heard my promise, and will do his best to keep Kelvin in the school.

Fred W. completed school at Namanjalala Secondary School and has a certificate of completion. We are proud of Fred and wish him the best in finding a secure job that will support himself and assist his father in the future. 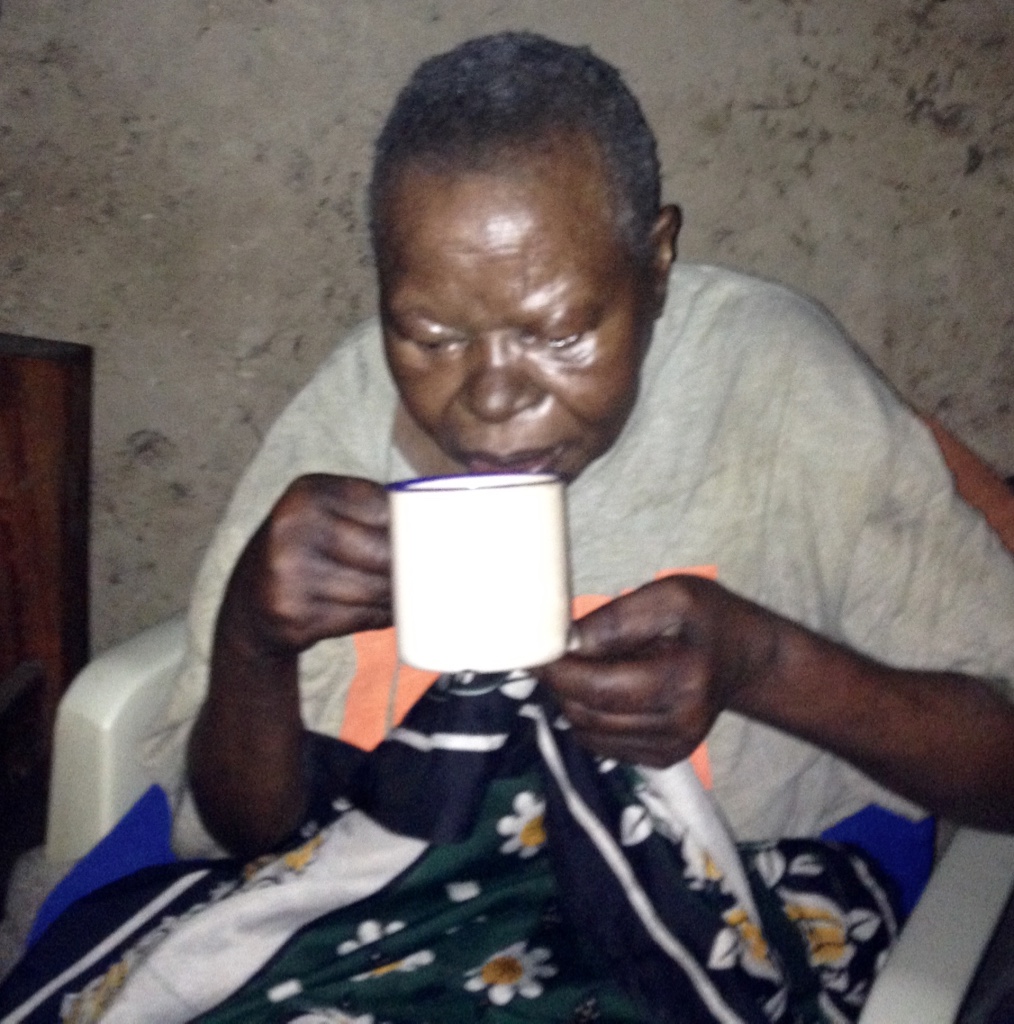 Jerida, the elderly woman who we assist, is now totally bed ridden now. We are still paying her care-giver who comes daily to bathe, cook and clean. Assisted living or nursing homes aren’t an option in Kenya. It seems we are doing the best to provide a job for a woman to earn money for food, school fees, and housing while providing care for Jerida.

Fred W, our student at Namanjalala Secondary school, is approaching his final year. In Kenya the fourth year of secondary school is the time to study up for the KCSE, Kenya Secondary School Exam. This test determines which students will have the opportunity to attend university or technical school with government-assisted expenses. Riva Refuge recognizes the importance of having time to study for the exam without the stress of household commitments. So we sponsored Fred to attend his final year as a boarding student at his school. Fred received a Riva Refuge sponsored bicycle two years ago. He was required to sell the bicycle and apply those funds to his fees for this final year of school. We do our best to follow our students over the long term, and we require the student or family to provide funds if possible.

Abiud J. and Biaisha S., the students studying secondary education diplomas at Kisii University, Kitale Campus, have not provided any grade reports for their entire first year that we funded. Sadly for them, Riva Refuge requires that students provide grade reports or other verification of satisfactory completion of a term or year of coursework before we will continue funding. We believe that students, especially those studying at university level, must be mature enough to provide this documentation. It is surprising that some students try to require that Riva Refuge acquire grade reports from their university. Maybe the best we can do is provide some help, then require that a student meet our contract requirements for further funding or pay future tuition themselves. Yes, it sounds harsh. But we aren’t just a golden purse to pay school fees. We insist a student be responsible as related to her/his age and circumstances.

We heard of a premie baby in the Falklands slum. We went in search, and found a tiny baby, the size of a newborn, left at home with three other children ages 2, 8 and 9. The 8-yr-old was feeding the baby some cow’s milk, diluted with water that may or may not have been heated/boiled enough to sterilize the water and the milk. The story was that mom had the baby one night (nobody knew she was pregnant) and then mom went into town to sell her veggies the next morning, leaving the baby at home without telling anybody about him. The story gets darker, but it turns out that the baby was born 2 months premature and had been left at home alone or with a sibling each day while mom continued to sell veggies in the downtown market. We talked to mom, explaining that she would be reported to Children’s Services if she left the baby alone or with other children. We helped her set up a home-based business cooking and selling french fries on her street corner. Fries are a typical street food for people as they walk home in the evening. We provided charcoal, the jika charcoal cooker, and half-a-bag of potatoes to get her started. In April, she abandoned her french fry business to return to town to sell veggies with her friends, and the baby is at home with a sibling who is missing school to babysit. But instead of babysitting, the sibling is running around the neighborhood playing. Premie Dan looked amazingly good considering his story! This is a very difficult situation. The single mom says she earns more money selling veggies than fries, and needs the money to buy food, shelter, clothing for the 7 other kids. 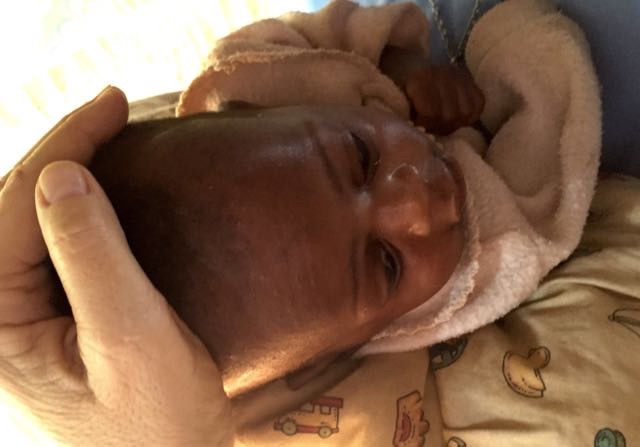 Fred W is a student at Namanjalala Secondary School. He lives with his father in a slum a few miles from the school. Fred has been walking to school in the dark early morning hours to arrive at school by their 7 AM reporting time. And it’s dark when he gets home after school. Then he still needs to walk to the well to collect water and make to dinner. He has a scholarship from a local Good Samaritan that covers tuition and books. After checking out his housing and school arrangements, we decided the best we could do for him was to provide a bicycle to save him time on the 1+ hour commute. He’s very pleased! We also paid for gutters to divert rainwater away from their house door and into a barrel for watering the corn growing in their household plat. Rainwater had been running into the house, flooding their packed dirt floor. Fred was lucky to find pants and a shirt from our bags of thrift shop clothes delivered to Kenya from the US.

Josephine has a broken leg as a result of her house roof falling on her two years earlier. She’s had surgery in the district hospital but the fracture does not heal. She has had the cast on for 8 months, without the money to return to the hospital for cast removal, radiographs and followup appointment. Through contacts Walter Reed Army Medical Center we located an American orthopedic surgeon who works out of Tenwek Hospital in Bomet, Kenya. We emailed Dr. Dan Galat, and arranged for Josephine will go to visit him. We promised that Riva Refuge would pay $300 toward the surgery. However, Josephine refused the surgery after visiting Dr. Galat.

Everyone had their fields planted in early April, except Josephine. I rounded up the local busy-body woman and asked if she could find people to plant if I brought the corn and bean seeds. Daughters of Charity had some money in their agriculture fund for plowing the two acre field. Additionally I bought BioFix, an organic bacterial inoculate of Rhizobium species to coat the bean seeds with. The bacteria fix nitrogen from the atmosphere, concentrating it into nodules on the roots of legumes. The result is that the beans and secondarily the corn get a steady dose of nitrogen organically, without the need for commercial nitrogen fertilizer. I hope her crops do extremely well so that we can convince others in the area to use the inoculant instead of inorganic fertilizer. The BioFix cost was about $2.00 per acre!

I’ve written about Jackline before. On this April visit she was sitting on the ground, looking very weak. Her forehead was very hot. Lucy and I suggested she go to the clinic or hospital, and I gave her money for a motorbike to pick her up immediately. We passed the husband as we walked back to the road, and he assured us that “She’s only been sick for two days.” Husband had a day laborer job helping a neighbor build a roof. This is rather typical: Women are not given money for health visits until they are extremely ill, whereas men go to the doctor earlier. I have no data to support this, but I’ve seen it enough to believe it’s a fact not just a skewed perception. Lucy saw Jackline the next morning, laying down beside the road about a quarter mile from her home. She was trying to find a motorbike going down the road instead of having a neighbor phone for one. And she was so weak that she couldn’t even sit up. Lucy again fixed everything. But four days later the word came that Jackline died. At first, the husband sent the two youngest to live with a relative, but they both got sick and were returned. That’s when husband told Lucy that he’d let all the boys all be adopted. Lucy is working on it. I’m hoping that they all go to the home where the twins that we found two years ago are living. It’s run by evangelical christians with generous funding from a church in Texas.

We visited Mama Triplets in her new mud home, which is a better location nearer school and water, farther from the flooding river. But Mama Triplets is a difficult woman. She thinks it is OK to cook a pot of porridge for the ten children in the morning and let them fend for themselves as she goes to visit friends or to work in the fields with them. When I ask what I can do to help her, her only answer is that I could give her 3000 KSH to start a business of buying and reselling vegetables. She doesn’t recognize that her children, ranging from 9 months to 14 years, need her to feed and nurture them. 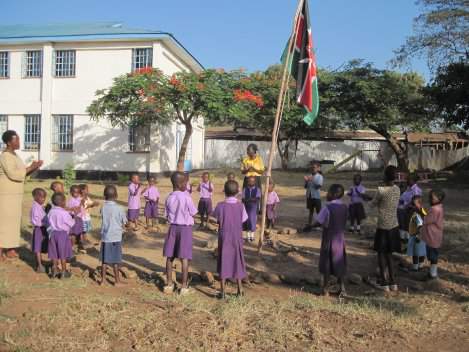